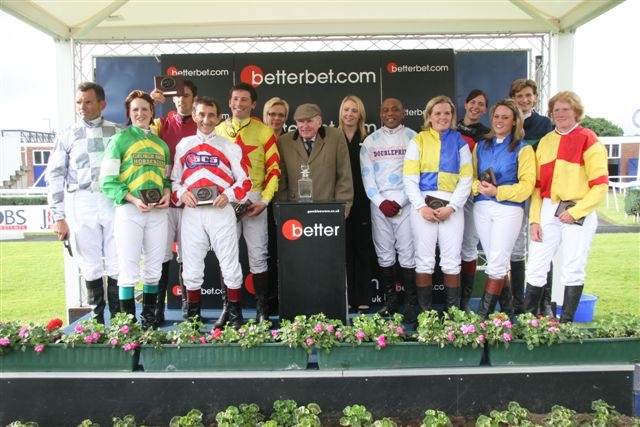 Click here leon-nurse.JPG to see an action shot of Leon and Ray McGhin as they battle out a thrilling finish!

Many congratulations to Leon Nurse who came to Newbury on 12th June with about 80 supporters to cheer him on in his bid to ride his first winner in the charity race.  The race was preceded by Bollinger’s third race in this year’s series, which saw a thrilling finish battled out, with Phil Collington on Julia Feilden’s Night Orbit just getting up to win by a neck from Andrew Balding’s Western Roots ridden by Joshua Moore.

11 runners went to post for the charity race held over a mile and five as the concluding race of the day which had begun with a charity lunch and auction to raise funds for Spinal Injuries.  Leon Nurse has raised over £30,000 for charity during the past few years and last rode in this race in 2004.

As the field turned for home it looked as if victory might go to Ray McGhin but Leon Nurse was always prominent on David Arbuthnot’s Glacial Sunset, still travelling well within himself, and Leon was able to kick for home to snatch victory in the closing stages.  He returned to the winner’s enclosure to rapturous applause from his many followers.  Congratulations to everyone for riding so well and rounding off a tremendous day which raised many thousands of pounds for Spinal Injuries.