The opening race of Cheltenham’s Paddy Power weekend – The Irish Times Amateur Riders’ Handicap Chase – was packed with incident and caused much discussion amongst the media to bring an interesting start to the weekend.

Jason McKeown is a familiar name to many of us, having won last year’s Fegentri World Championship for Ireland only a few points ahead of our own David Turner.  Always at the rear, he survived a bad blunder at the first ditch on Hoopy, losing both his whip and an iron in the process; in fact both legs were the same side of the saddle for a short while.  Still in the rear at the third last, Jason managed to persuade Donal Devereux to lend him his whip (Donal having already decided to pull up King Harald at that stage).  Once given a crack, Jason and Hoopy soon began to make good progress to stay on strongly and win going away.

Ian Chanin, rider of the second, was advised by connections to lodge an objection which was subsequently overruled and the places remained unalterred.  As Alan Sweetman reported in The Racing Post: “There is no doubt that there are particular aspects of jockeyship that provide a special thrill for the spectator, such as a rider executing a gravity-defying recovery from a bad jumping mistake, or coping with a failure of equipment such as a slipped saddle or the loss of irons.

Sometimes, you see the genuinely unorthodox, and there was a case in point in Friday’s opener when Jason McKeown, who lost his whip when his mount Hoopy made a mistake early on, took a leaf out of the Lester Piggott manual by ‘borrowing’ another rider’s stick at a vital stage, helping to secure a victory against the odds.One could, of course, take a disapproving view of his action as irresponsible and possibly unfair, but the Cheltenham stewards adopted a more benign and sensible approach by giving him what was basically a token two-day suspension.It was an incident that added an extra bit of colour to an eventful day, and while one would not want this sort of thing to become commonplace, it was heartening to see there was no official overreaction.” 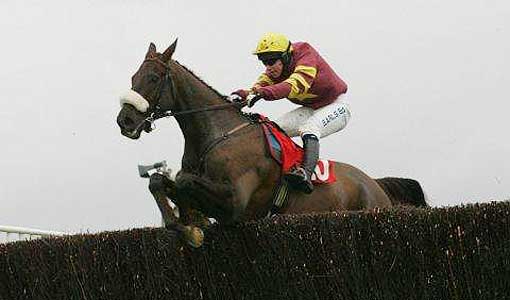