Since Folkestone Racecourse twinned with Pompadour Racecourse in SW France in 2006 both courses have taken pride in entertaining each other and celebrating the relationship at two meetings each year on either side of the Channel.  This year Neil Mackenzie Ross, Folkestone’s Clerk of the course, added a new race to the card for English and French amateur jockeys, the Prix de Chateau de Pompadour Handicap Hurdle.  Neil said, “We wanted to make a bit more of the Anglo/French theme and I thought that an amateur race for both English and French Jockeys would make a spectacle on the day.  It was well supported at the entry stage, but I think the rain must have put off a few horses.  However, the day was a great success and we intend to continue to build on this meeting”. 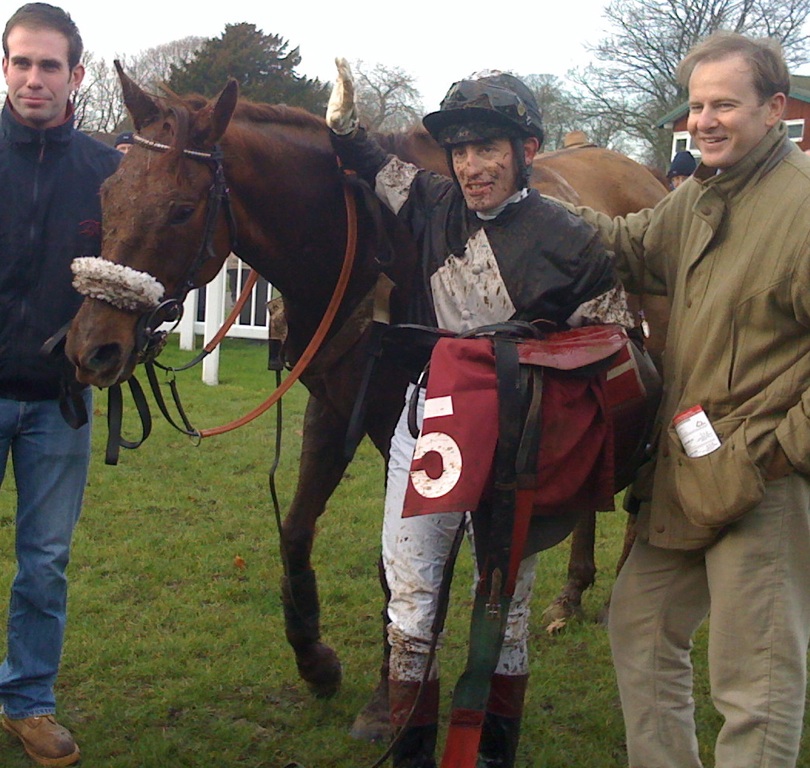 French amateur jockey Cyril Coste rode his first winner outside France on DOCTORED, who was in front before the home bend and stayed on in the heavy ground to win by 21 lengths from  fellow compatriate Patrick Pailhes on DRIZZI with Danny Cook for GB in third.  Many congratulations to France on their victory and many thanks to Monsieur Francis Delord, President of Pompadour Racecourse, for his valuable sponsorship.

Nearly fifty supporters of Pompadour Racecourse made the journey to Folkestone where they have dual honorary membership.  Emma Santer, General Manager at Folkestone Racecourse, said “Despite the cold weather and rain beforehand it all went really well.  I think everyone enjoyed their stay and the French jockeys had a great time over the weekend!  We have done a lot to raise awareness of Pompadour and have been receiving many enquiries about the return visit to Pompadour in July.”