Drama with launch of Home-Tek Ladies Hurdle Series at Catterick 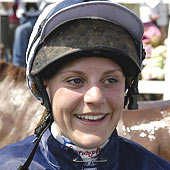 A maximum field of 16 runners went to post for new sponsor Home-Tek’s first ever sponsored ladies race at Catterick today.  Their series was originally planned to be launched at Leicester in January but bad weather meant a rescheduling of the series which now includes Market Rasen to complete the five races.

Drama early on in the race saw Jacqueline Coward (pictured above) take a nasty fall when parting company with favourite Ras Laffan which knocked her unconscious.  Lucy Horner capitalised on leading the field from early on and went on to extend her lead with the penultimate and final hurdles omitted and sprinted to the line to win by 6 lengths from Gemma Gracey-Davison in 2nd and Tina Jackson 3rd.

An air ambulance delayed racing by taking Jacqueline to nearby Middlesbrough Hospital and we all wish her a speedy recovery and swift return to the saddle.  Many congratulations to Lucy Horner who now leads the ladies in the series which travels next to Huntingdon on 11th March.