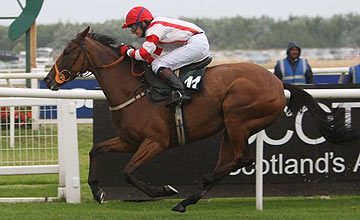 Current leading lady flat jockey Wendy Gibson, heading the amateur tables on 3 wins already this season including the Ladies Derby at Ripon (photoed above on DIMASHQ), is being treated for injuries to her back, liver and ribs in Leicester Royal Infirmary following a dramatic fall at Leicester on Thursday night, 25th June.

Soon after the starting stalls opened, NOMOREBLONDES appeared to stumble and as the mare dropped her head, her jockey was thrown onto the firm ground where she was also subjected to a kicking.  Racing was delayed for half an hour whilst two doctors accompanied Wendy to hospital.

Peter Midgley, the trainer who has supplied Wendy with her winning rides so far this season, remains hopeful that she will make a swift recovery so that she can aim for a tilt at this year’s Ladies Amateur Flat Championship.  Hopes for Wendy to be released from hospital this weekend have not come to fruition as she took a kick directly on her stomach and has severe bruising.

Wendy enjoyed representing Great Britain in Baden-Baden earlier this summer and also rode a winner in Malaysia last year.  We all wish her well again very soon and look forward to seeing her hopefully back in the saddle before too long.