The husband and wife team of Richard and Vicki Fahey claimed the opener on Ascot’s big late July Saturday card with easy winner CASTLES IN THE AIR.

The Longines Handicap is one of the major ladies’ races of the year and it was smooth sailing for Vicki to land the third winner of her career as she cruised into the lead at the furlong marker and surged four and a half lengths clear. 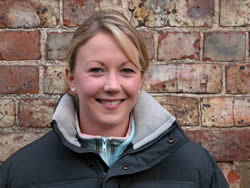 Golden Desert, the 5-1 favourite and mount of Katie Walsh, was second.  “Amazingly it all went to plan” said the jockey.  “I spoke to Jim McGrath (owner) this morning and he just said ride him as you find him. That’s my third winner, and the second since I was married. I said to Richard if I win this and the ladies’ race at York, I’ll retire!”

Vicki is enjoying a fine season.  She rode her first winner at Brighton 6 years ago, and since then she has had her daughter Niamh.  Vicki rode her second winner at Beverley in early July when THE LAST ALZAO scored in determined style to justify her position as favourite.  (Vicki pictured below giving her husband’s charge ROSE BLOSSOM a welcome drink after her victory at Hamilton earlier this season.) 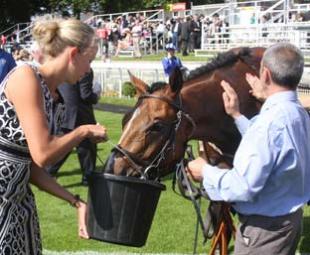