Reigning ladies amateur NH champion Lucy Horner had to be airlifted to hospital this afternoon after a pile-up at Sedgefield when five horses came down at the first in the juvenile hurdle.  The other four jockeys escaped unhurt but Lucy, riding RAVATI for Chris Grant, was knocked briefly unconscious and suffered facial injuries as well as a dislocated shoulder (which went straight back in) as a result of which the air ambulance was called.

Paddy Aspell was shaken up from his fall in the same race and was stood down for the remainder of the day.  Racing was delayed on the course for 35 minutes whilst Lucy was attended to.

Clerk of the Course Charlie Moore said “Lucy was conscious when she left the racecourse but she was suffering from facial injuries.”  Lucy was taken to James Cook Hospital in Middesbrough from where she was allowed home later in the day.  Lucy has a fractured cheek bone and severe bruising following a kick in the face which smashed her goggles which in turn also caused lacerations.  We all wish Lucy a swift recovery!

Only 5 of the 12 starters completed the course. 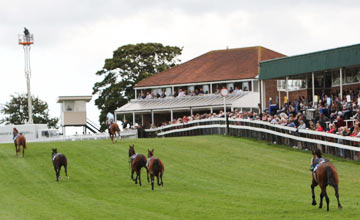