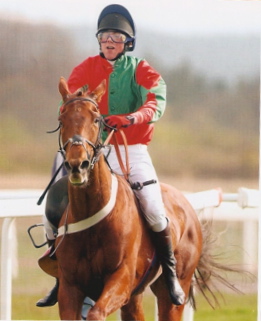 Justin stylishly flew over the penultimate fence in a leapfrog position with both feet above the withers of his mount.  On landing, his saddle disappeared from underneath him and a side-door exit seemed inevitable but he was pushed back into place by Big Quick’s off-foreleg.Initially cruising 6 lengths clear of the field, the duo were able to maintain their lead minus the saddle and sailed past the post 2 lengths clear.  Fortunately for Justin, he was riding without a weight cloth.  Had he been using one and it had fallen from under the saddle, obviously he would have lost the race.

Although Justin admitted he was “singing the soprano” after an uncomfortable bounce home, the ride that broke his duck was a “tear-jerking moment” for more reasons than one.  He continued as an amateur for several years including being Great Britain’s Fegentri representative in 2005 before retiring from the saddle in 2007.