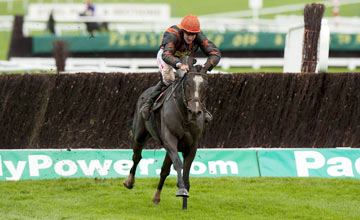 Riding for his trainer father Nigel, Sam Twiston-Davies partnered RAZOR ROYALE to a great victory in the opener, The Irish Times Amateur Riders’ Handicap Chase, at Cheltenham today.  His mount relished the testing ground and the pair gave a great display of jumping and galloping.

Front-runner THE SAWYER had STRAWBERRY and FREEZE UP on his heels for the first circuit. Last year’s winner, HOOPY, was towards the rear whilst favourite MY LORD OSCAR was anchored in last by Nina Carberry.On the second circuit the pace quickened, with Freeze Up and Qhilimar moving to the front at the top of the hill. Razor Royale was always travelling ominously well behind and was quickly pursuing Qhilimar before three out.At that fence Razor Royale was left alone in front when Qhilimar blundered in what was a sign of things to come as he fell at the next. By contrast, Razor Royale put in a magnificent jump at the penultimate fence and stretched clear to draw away from his weary rivals with relish.  The Sawyer (Mark Wall) was a gallant second, with Mister Apples (Oliver Greenall) back in third.

Many congratulations to Sam and to winning connections on a very special win to remember.