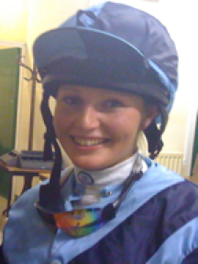 Congratulations to Charlotte Holmes on riding her first Flat winner this evening at Hamilton in only her fifth ride under Rules.

Having missed the break, IVESTAR did not look likely to be troubling the judge.  However, once the field hit the rising ground, his stamina came into play.

With riding instructions of not to make a move until after the 2f marker, at that point Charlotte got to work and her mount responded by running on strongly to lead close home in a tight finish, beating reigning champion amateur jockey Simon Walker and EL DECECY by a neck who in turn finished in front of Justin Newman and FINAL SALUTE by a nose.