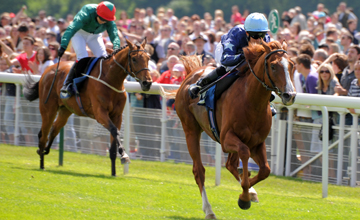 The sunshine at York welcomed RACHEL KING to the winner’s enclosure this afternoon following the 23rd running of the Queen Mother’s Cup with a bumper field of 18.

Prominent in the early stages of the race were Daaweitza, Twisted and Conquisto ridden by KATIE WALSH, but turning into the straight it was the turn of LOUISE ALLAN on Antiqua Sunrise to take it up and lead into the final furlong.  However, Rachel had lined up bottom weight Desert Recluse down the centre of the track for the final stages of the race, riding a well judged run to outstay her rivals and go on to score by 6 lengths.

Rachel was scoring for the third time under Rules in her career so far.  Last season’s amateur lady champion jump jockey LUCY HORNER finished in 2nd place on Alcalde, with JACQUELINE COWARD 3rd on the on-running Crackentorp and EMILY JONES 4th on Siberian Tiger.

After her victory Rachel said “He did it very well.  He was the only 3 year old in the field against older horses.  He was so game, he never gave up.”  Thanks to the customary generosity of Pol Roger, Rachel can now look forward to enjoying drinking her weight in champagne as is the tradition with this historic lady riders’ race.  Many congratulations to Rachel and winning connections.