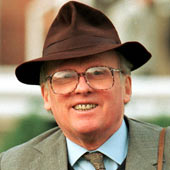 Champion amateur jockey in 1959-60, Gay broke his back five years later but rode again against medical advice.  His last winning ride was for Fegentri in Belgium and he trained at East Garston after retiring from the saddle.  Amongst his horses owned was Carrickbeg, just beaten by Ayala in the 1963 Grand National ridden by Lord Oaksey, and Gay often reminisced about the race and the party afterwards which cost more than his placed prize money!

Gay’s health deteriorated in recent months and he retired as AJA President in December to be appointed Honorary Life President.  Following a small stroke on Tuesday, he was admitted to hospital where he unexpectedly died on Thursday.

Numerous tributes have poured in which include:

Funeral arrangements are yet to be announced and are delayed because of the Bank Holidays.