Many congratulations to Serena Brotherton who rode her 100th winner today at Wolverhampton when winning the amateur seller on VISIONS OF JOHANNA for Richard Guest.Serena said “I got rather muddled up with my counting last week, but that definitely makes a hundred if you include point-to-points and hunterchases.  I have so many highlights including winning the Queen Mother’s Cup at York twice and the Diamond race at Ascot.”Serena already leads this season’s ladies flat table with 4 wins on the turf, having won the championship 4 times before as well as the All-Weather championship in 2009/10.

Would you like to ride in a charity race to be held as the first race on the highlight evening of Carlisle’s social calendar?

This is The ULTIMATE LADIES NIGHT – a world first with a card exclusively for lady jockeys.

Over 8,000 people attended last year’s spectacular event and this year it promises to be even bigger and better with a 40 minute post racing concert by Alexandra Burke.

If you are a competent lady rider and are interested in taking part in the charity race please e-mail sph.oliver@btinternet.com for further details.

The annual Anglo/Irish match staged in Limerick every November has its return match at Newton Abbot next week, with the same November teams taking part where possible.

Having tasted victory for the British team last November 7th in Limerick when Alex Dunn won the Irish leg of the annual ladies Anglo irish challenge for John Walsh, the British team now look forward to next Tuesday evening.

The GB team is made up as follows:  Lucy Alexander, Lorna Brooke, Alex Dunn and Joanna Mason.  So far 4 Irish lady jockeys are confirmed to be joining the challenge: Rachael Blackmore, Liz Lalor, Jane Mangan and Aine O’Connor.

Please remember to contact Licensing if you should ride a winner abroad, including , so that your tally of wins is kept up to date at both the BHA and Weatherbys.  This is absolutely vital to make sure that you claim the right allowance.  Individual race conditions should always be checked as they can differ from the usual Rules which state:

All amateur jockeys will have a received a letter with their riding permit confirming the number of wins recorded at the BHA and asking you to contact Licensing if your records are incorrect. 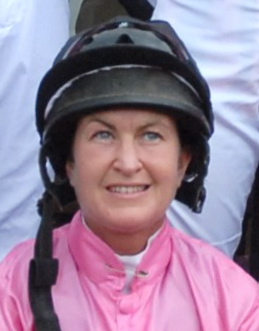 Many congratulations to our reigning flat lady champion Serena Brotherton who notched up her 50th flat winner today scoring by a neck on COMMANDINGPRESENCE for John Bridger from Katie Margarson and IMAGINARY DIVA at Folkestone in the first ever ladies race to be held on the South Coast track.

This win also takes Serena into the lead for this season’s ladies tables giving her a total score of 3 wins so far, 2 in front of her rivals, making her long journey from North Yorkshire well worthwhile.

Many thanks to Emma Santer and all at Folkestone for this new addition to our calendar.

This Thursday Newbury Racecourse host their annual raceday in aid of Spinal Injuries with Henry Kelly as guest speaker.  The charity race which follows racing and is being run in memory of Gay Kindersley includes Gina Bryce from At The Races.

There is a post-lunch auction which includes 3 x one hour lessons with Mark Todd.  If anyone would like to bid for this, please e-mail sph.oliver@btinternet.com by midnight on Wednesday 8th June and your bid will be included in the auction.