Derek O’Connor ruled out of Cheltenham with broken leg 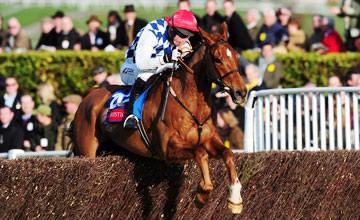 Ireland’s champion point-to-point jockey Derek O’Connor, successful at last year’s Cheltenham Festival on both Zemsky (pictured above) and Chicago Grey, broke his leg at Musselburgh yesterday when taking a heavy fall from Simonsberg in the hunter chase.  Unfortunately the horse was fatally injured.

Derek said “I might be getting an operation later today.  Its disappointing obviously and I am probably looking at 8 to 10 weeks out of action.”  The timing could not be worse with not only Cheltenham but also the Irish Grand National, Aintree and Punchestown looming over the next few weeks.  We all wish Derek well for a speedy recovery.