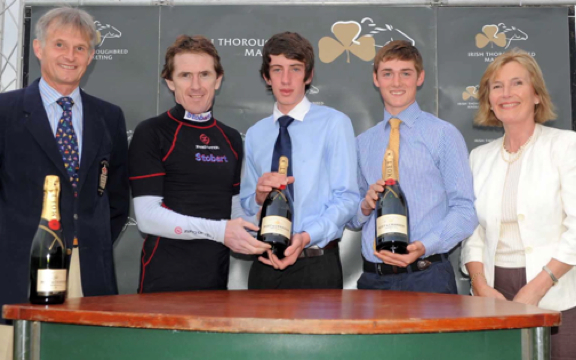 Many congratulations to Emma Sayer who sadly was unable to attend Stratford on the evening of 1st June to collect her magnum of champagne but with 11 winners ridden under Rules this 2011-12 season, Emma has won not only the Amateur Lady Jockeys NH Championship but also can claim to be the season’s Overall Amateur Champion  Jockey of the NH season – what a fantastic achievement!  Well done also to runner-up with 6 wins, Catherine Walton.

Many congratulations also to Robbie Williams (pictured middle) and Jack Quinlan who share the men’s title with 10 wins apiece and received their magnums from The Champ and Sports Personality of the Year AP McCoy at Stratford.  Runner up to Robbie and Jack was Rob Jarrett.  As soon as he had collected his bottle, Rob was legged up to ride the winner of the next race Rumbury Grey in the Novice Champion Hunterchase making his tally 8 wins for the season. 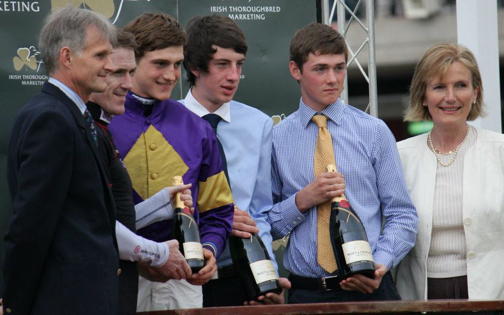 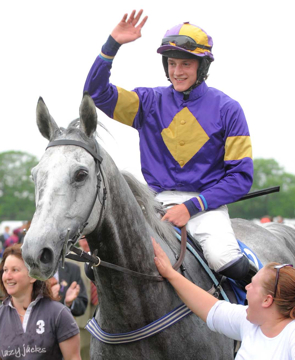 Jack turned conditional early on in the season and Robbie followed the same path a few days after Stratford, having his last ride as an amateur in Mannheim (Germany) in a Fegentri race that weekend where he finished 2nd.  We wish both Jack and Robbie every success in their professional careers.