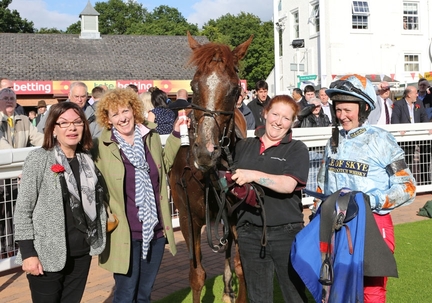 The most poignant of results was enjoyed at Hamilton today when this season’s NH ladies championship runner-up Catherine Walton donned her red “devil” breeches in the Saints and Sinners ladies race.  Following the field at the rear on LILLY INN (name after a local hostelry), the partnership made steady headway to lead a furlong from home and score easily from Jacqueline Coward on HI DANCER.

With the racing community struggling to come to terms with the recent loss of rising star Campbell Gillies, rarely has there been a more emotional victory on the racecourse and Lucinda Russell paid tribute to both Campbell and all her team in her interview with Gordon Brown following the race.  This was Lucinda’s first runner since the death of her stable jockey, who had ridden Livvy Inn in his only other win in a novice hurdle at Kelso 3 years ago.

Lucinda said “I may never have another Flat winner but that couldn’t have come at a better time.”  Livvy Inn is owned by Mrs Elizabeth Fergus, whose husband Billy added “We woud like to dedicate that win to Compbell who rode lots of winners for us.”