Lucy Gardner starts the New Year with a double at Exeter!

Many congratulations to Lucy Gardner whose New Year could not have started better, riding a double for her trainer mother Susan at their local track Exeter which was appreciated by an applauding record crowd. 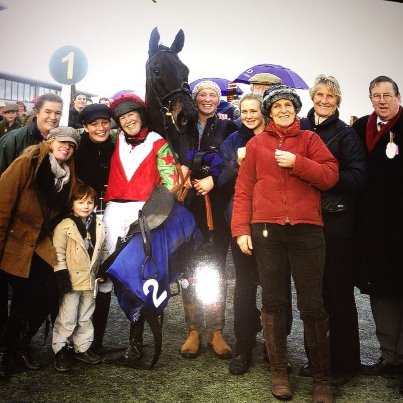 STORM ALERT gave Lucy her first win of the afternoon in the novice hurdle named after Billy Williams, father of trainer Ian.  Storm Alert used to dive left at every hurdle and try to deposit his jockey.   Today however he was excellently handled by his amateur jockey ready for his antics when he swerved slightly at the final flight and responded gamely to win.  About an hour later FLYING AWARD followed up with victory in the 3 mile Handicap Chase giving Lucy her double of the day.  Her mother looked on in disbelief, saying “Pinch me, pinch me, this can’t be happening!”

Very many congratulations to winning connections on such a great start to the New Year which now gives Lucy a total of 6 wins this season and takes her into the lead for the ladies jump championship, one ahead of current overall reigning amateur jumps champion Emma Sayer.