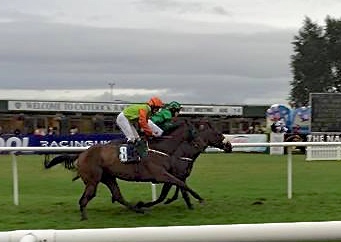 Congratulations to Joanna Mason on a thrilling victory at Catterick this evening when scoring a hat-trick aboard her mother’s TAPIS LIBRE trained by her grandfather Mick Easterby.  This was their third victory in a fortnight, the partnership have been successful previously at Musselburgh on 31st July and 7th August.  But this was by far the most dramatic of finishes fighting it out with champion jockey Simon Walker aboard HUBERTAS, with TAPIS LIBRE having to dig deep to hang on by the smallest of margins with a photo called and the winning margin a short head!