On a rain soaked day at Epsom, there was a touch of irony with the aptly named ENGLISH SUMMER trained by Richard Fahey giving Ireland’s Champion Amateur Paddy Mullins an armchair ride for his second victory within three years in the Epsom Gentlemen’s Amateur Derby. 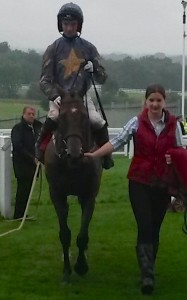 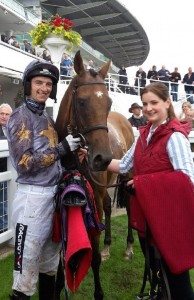 Patrick was happy to sit absolutely motionless aboard his horse for most of the race, only to ease past them and win by 6 lengths with the utmost of ease.  After the race h said: “I thought they went a bit hard.   I was a little worried as I am used to going a bumper pace, but my fellow was a very easy ride. Being by Montjeu, he loved the ground and I think my grandmother could have won on him.

It was a nice coincidence to win on a Montjeu, the day that Hurricane Fly was retired.  It is a race I have marked out at the start of the year and I always try to get a ride in it.  To ride on the Derby course is magic.  My father never won this race, so I give him a bit of stick about that.  I am one up on him there and I don’t often get that!” 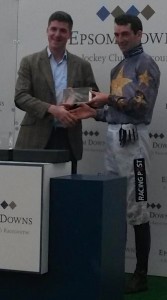 Well done to Paddy and to Richard Fahey who also of course won the ladies Derby here with this horse back in July when Aly Deniel enjoyed victory by a neck!