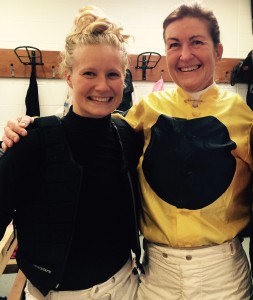 The ladies Flat season drew to its customary close at Newbury on Saturday with a media frenzy around Olympic cyclist Victoria Pendleton having only her third ride under Rules and bookmakers incredulously making her mount Satanic Beat favourite.

Followers of the Ladies Amateur Flat Championship were however concentrating on Joanna Mason‘s last ride of the season whilst she remained alongside Serena Brotherton top of the tables on 6 wins each, but Serena without a ride.

Ultimately the season concluded with Gina Andrews winning for the in-form Pam Sly on SYNCOPATE staying on well ahead of long time leader Katy Lyons and GLENS WOBBLY, with Charlotte Pownall having her first ride and finishing third on BOHEMIAN RHAPSODY.  (Joanna finished 11th; Victoria was unseated inside the final furlong when her horse stumbled.)

Joanna’s story for 2015 is extraordinary, having broken her back point-to-pointing in March this year which necessitated her having 8 pins and 2 steel rods inserted into her back.  Jo displayed huge grit and determination pushing herself hard physically, successfully showing her regular partner LIVERPOOL whilst she recuperated, and was passed fit to return to race riding by the BHA at the end of June!

As the ladies season progressed, both Serena and Jo forged ahead of their competitors and gave a real edge to the battle for the championship with a ding-dong battle at the top of the tables.  An added twist was Jo picking up a 4-day ban at Brighton which consequently stopped her riding in 3 races but Serena did not ride in the final 3 of the season, leaving herself vulnerable until the finale.

Huge congratulations Jo on not only your first ladies championship but also on overcoming so much adversity, and many congratulations also to Serena on another amazing season!  Yorkshire must be very proud of you both!