Racing mourns the loss of the great JT McNamara 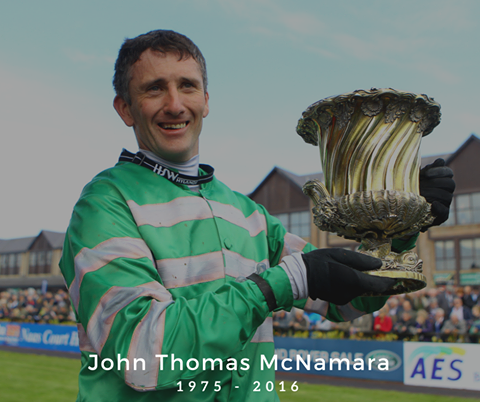 Ireland’s racing community are mourning the loss of their legendary and much loved amateur jockey JT McNamara who suffered a career ending fall at Cheltenham Festival in 2013 which immobilised him from the neck down. He was aged 41.

JT was widely regarded as one of the best amateur jockeys that racing has ever known as well as one of the most popular.  His achievements in the saddle included 602 point-to-points as well as Cheltenham Festival’s National Hunt Chase  in 2002 (Rith Dubh) and 2012 (Teaforthree), the Glenfarclas Cross Country Chase in 2005 (SpotTheDifference) and 2007’s Foxhunters (Drumbeag).

Our deepest condolences are extended to his wife Caroline and their three children Dylan, Harry and Olivia together with the rest of his family.  May he Rest In Peace.