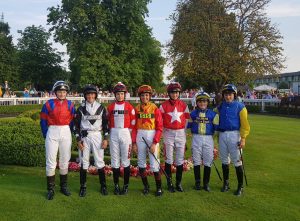 Last year we were delighted to see Carol Bartley enjoy victory in the Silk Series when winning at Newcastle. That was the sole amateur win in the series’ inaugural year which was launched by Arena Racing as a new race series specifically for lady jockeys. 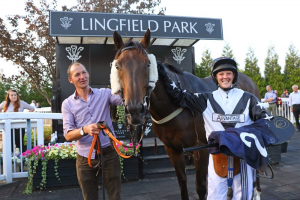 The first race of 2018 was held on 2nd June at Musselburgh where Cath Walton (2nd) and Joanna Lucy Mason (5th) were the only amateurs riding against 6 professionals. Since then Chepstow on 13th July included Grace McEntee (5th) and Kathy Begley (6th) when 6 ran and Yarmouth on 18th July saw sole amateur Grace McEntee (6th) gain more experience in a 6 runner field. Consequently the series felt rather quiet but everything was about to change at Lingfield! 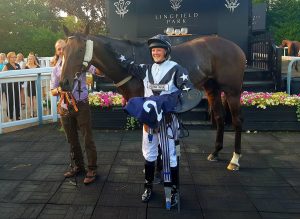 David Drinkwater’s ASHPAN SAM ridden by Ellie MacKenzie made all in this 4f sprint, quickening up to lead two furlongs from home and pushed out by Ellie inside the final furlong to win comfortably by 2 lengths. Apprentice Milly Naseb was second on SHAMSHON with amateur Sophie Coll 3rd on OIL DE TIGRE.

No stranger to the big stage (having enjoyed an Arabian Group win at Newbury last year), congratulations to Ellie on a great ride and well done to winning connections!