Gay Kindersley remembered across the world 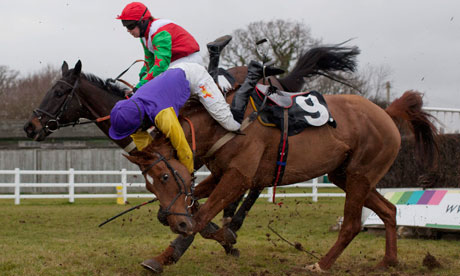 Two of racing’s greatest characters were remembered at Plumpton this afternoon.   A minute’s silence was observed to remember Josh Gifford, the course’s second winningmost trainer, and Windsor Partners kindly sponsored their annual Amateur Riders’ Handicap Chase for the Gay Kindersley Memorial Salver which produced a dramatic finish.  Ben Poste (pictured above) was unlucky when his mount BALLINHASSIG blundered badly at the last when staying on and unseated him.  Well done to Lucy Gardner who produced FLYING AWARD (having only his second run over fences) with a perfectly timed run to snatch victory on the line by a head from SOLE AGENT.

Meanwhile the Fegentri General Assembly 2012 was held in Doha, Qatar, where Baron Henri de Montesquieu called for a minute’s silence by the assembled company in honour of his dear friend AJA Honorary President Gay Kindersley, with whom he rode in the fifties and sixties when the true Corinthian spirit was enjoyed along with life to the full.

One thought on “Gay Kindersley remembered across the world”