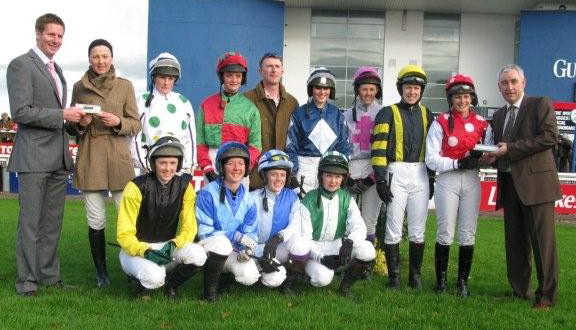 For the second year in succession Clare MacMahon was victorious in the Anglo/Irish Ladies Challenge Hurdle at Limerick.  Unfortunately Kelly Bryson from Scotland had a non-runner but the remaining British team of 5 lady jump jockeys took on the Irish and Lucy Jones was the nearest foreign jockey in the finish with her horse placed 3rd.  The girls reunite for a re-match at Newton Abbot in June.  Congratulations to Ireland and to Clare!

Robbie Henderson ran the opposition into the ground on ELLERSLIE GEORGE in the Badger Ales Trophy at Wincanton today, sensationally giving trainer Nick Mitchell an unforgettable day’s racing following on from THE LISTENER winning at Down Royal only minutes earlier.

Robbie’s father acquired the horse at Doncaster in May when unsold for £20,000 and he won first time out for Robbie at Stratford in September.  He then was beaten at Bangor but today’s front running tactics paid off splendidly.  His modest rider said afterwards “I didn’t have a choice with that.  All I had to do was sit there and he did the work; I was only a passenger.”

Many congratulations to all connections on a fantastic win! 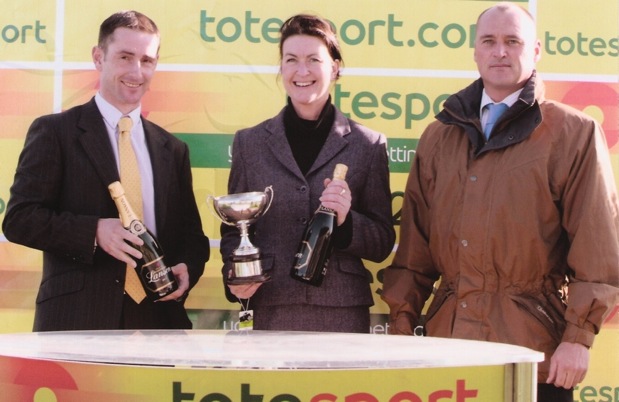 For the first time ever, the AJA are delighted to announce that our amateur flat champions Serena Brotherton and Simon Walker will be included in the C4 televised end of season Flat Championship presentations to take place this Saturday 7th November.

The annual Anglo/Irish ladies hurdle challenge is eagerly awaited and planned to take place in Limerick on Sunday 8th November.  No inspection has been announced but flooding is already causing problems in the area.

This year’s GB team is made up of:

Gina Andrews, who works in a point-to-point yard and hunts regularly, and has 20 point-to-point wins and 12 wins under Rules (2nd in this season’s NH ladies table with 3 winners already);

Lucy Jones, an accountant who has ridden 3 NH and 16 p-t-p winners and was Ladies National Novice Point-to-Point Champion 2008;

Clare Wills, who has worked for Brendan Powell for 9 years and has had 6 point-to-point wins and 1 under Rules;

Jenny Carr, who has had 2 NH wins under Rules and  16 point-to-point wins and been Area Point-to-Point Champion and last but certainly not least,

Kelly Bryson from Scotland who has had 2 NH wins and 40 point-to-point winners.

The girls face an Irish team of 6 but the biggest danger that we all face is the weather which could put the meeting in jeopardy.