Thanks to an introduction by Emma Santer, Manager of Folkestone Racecourse to Francis Delord, President of Pompadour Racecourse which is twinned with Folkestone, this Sunday sees the inaugural running of the Three Nations Cup with representatives from Ireland, France and Great Britain’s amateur jockey associations taking part.

John Dawson, Josh Hamer and Miles Seston represent Great Britain, Andrew Doyle, Richard Harding and Roger Quinland represent Ireland and Patrick Pailhes and Jean-Philippe Boisgontier represent France in the eight runner hurdle.  There is currently a heatwave in Pompadour and so they have done well to have this many runners declared with temperatures in the high 30s.

The return match will be held at Ludlow on 11th November and in Ireland at the end of the year.  Good luck to Team GB!

Have you renewed your amateur licence yet?

A reminder that all amateur jockeys’ licences expire annually on 31st June and that you should therefore have already applied for your new licence for 2010/2011 by now if you wish to ride under Rules as an amateur jockey.The current licence application form is available by clicking on this link:

together with the medical form on this link:

If you have recently had a fall there might be a slight delay in processing your licence due to any necessary medical clearances so please DO NOT DELAY in order to avoid disappointment!

AJA membership has automatically included insurance for riding out and handling racehorses worldwide since 1st July 2007.  Since that time there have been 22 claimants under the scheme, one member claiming twice.  Unfortunately, because of these claims, our insurance premiums have risen year on year, and this year’s premium has been calculated at three times its original cost.  We would not consider canceling our insurance as it is so highly valued by you all but a major change is necessary in order for the AJA to be able to continue providing this cover.

After consultation with our brokers, as from 1st July 2010 any AJA member who is on a licensed trainer or permit holder’s payroll and is eligible for RIABS (Racing Industry Accident Benefit Scheme) will be asked to claim under RIABS.  Members covered by RIABS will be exempt from AJA insurance for riding out.  This will enable the AJA to look after our most vulnerable members when they are injured, ie those between jobs or those self-employed or employed outside racing.  To bring non-RIABS members into line with stable staff, benefits will increase to £200 per week from our current £100 and our excess will be reduced from its current 40 days to 28 days after injury.

We believe that whilst cover is restricted to those members that are not eligible for RIABS payments, most AJA members will benefit from the policy at some time.  If you have any queries, please do not hesitate to contact Sarah Oliver at the AJA.  The good news is that the cost of AJA membership remains unchanged for the time being at £75 for a full year’s subscription. 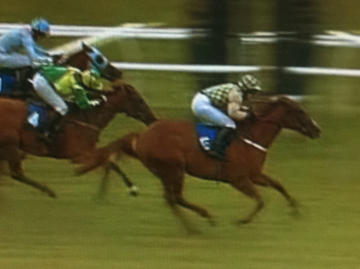 Jacqueline’s patience and perseverance on the long slow road back to recovery following her serious fall at Catterick in February 2009 (in which she was dramatically airlifted off the course) finally paid off today in style at Ayr.

Jacqueline was a late substitute for Miles Seston who was unable to do the weight and this spare ride managed to give Jacqueline her first winning ride under Rules since her injury.

This is a huge achievement for Jacqueline after such a long and deliberate recuperation and we all send her very many congratulations! 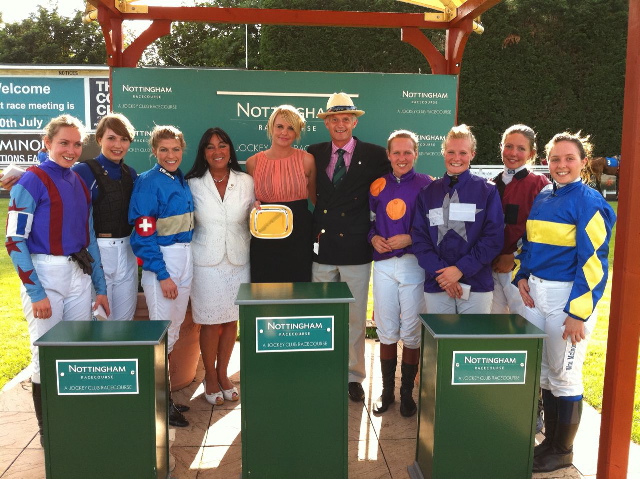 PIP TUTTY riding her own Hurricane Thomas led the field out of the gate but was soon headed by NINA WAGNER (Germany) into the home straight.  As the pace quickened, Desert Fairy and TINA HENRIKSSON (Sweden) took it up but it was the tenaciously ridden Aragall and RUTH JEFFERSON who forged clear of their rivals two furlongs out to hold on and win by 5 lengths.  Second was PIP (GB not nominated rider) and Hurricane Thomas with TINA and Desert Fairy 1 and 1/4 lengths back in third for Sweden and JOANNA MASON (GB not nominated rider) in fourth.

Many congratulation to Ruth.  This win has given her 20 valuable points and closes her gap in second place behind France’s PAULINE BOISGONTIER who currently leads this year’s Ladies World Championship tables.

The ladies travel to Sweden on 15th July for their next race. 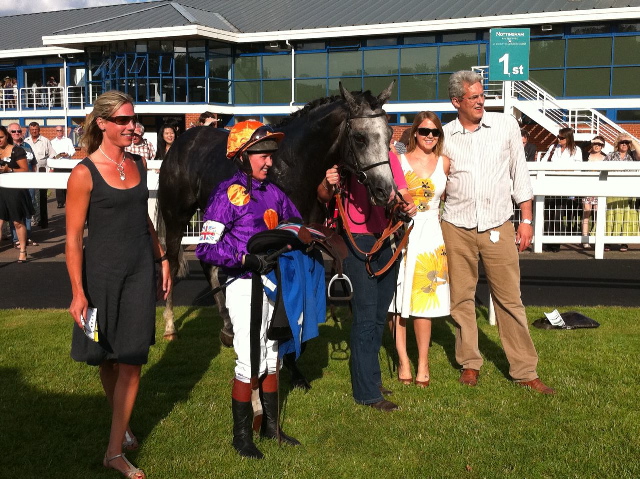 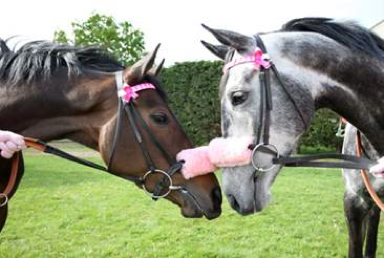 Chester hosts a ladies race with a difference on Friday 9th July when jockeys in the Breast Cancer Care Pink Mile will wear specially designed pink colours. The race will be a pro-am mares only race (4 year olds and upwards) with a maximum of 12 runners wearing pink number cloths with a special pink winning post and racegoers are encouraged to wear pink on the night.

This first ever “pink race” is being hosted by Chester Racecourse and “Racing for Change”, the body set up to broaden the appeal of the sport, with the aim of raising £25,000 for Breast Cancer Care. There will be a number of fund raising initiatives and Racing UK have agreed to donate £5 of every subscription on that day to the charity. They will screen the race free-to-air while some of the country’s top bookmakers have also committed to donating a percentage of their profits on the race.  Louise Owen, wife of footballer Michael, will make the presentations to winning connections.

According to Nick Attenborough, spokesperson for Racing for Change:“This is a great opportunity for people to enjoy an evening at the races and help a great cause. Why not dress up in pink and show your support?”

To find out more about the Breast Cancer Care Pink Mile visit: